Report on the death of Lathitha Nako 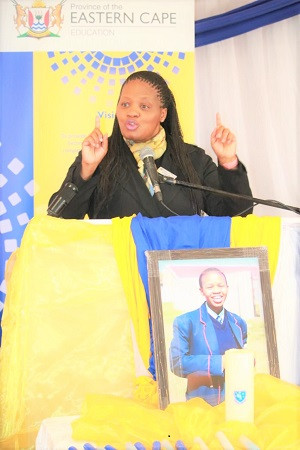 After the death of Lathitha Nako, a grade 10 learner at Bhisho High school who took her life on Wednesday, 17 November 2021, the Department made an undertaking that an investigation will be conducted to delve deeper into allegations leveled against any person, be it learners/ educators and anyone else who might have had an indirect or direct involvement in incidents leading to the death of this learner as these were widely circulating in the social media space.

The investigating team comprised of officials from Labour Relations Unit both at Head office and Districts was constituted to conduct a thorough investigation and incorporate all facts from all parties and were given seven (7) days to conclude the task and most importantly to treat the matter with the sensitivity and urgency it deserves.

The task team has indeed concluded its pre-liminary investigation report and has submitted it to the Head of Department for further actioning. All affected/ implicated parties will now be consulted on the outcomes of this report, and the sessions will start with the family of the deceased leaner 0n 15 December 2021 to table to them the contents of the report.

Subsequently, all other affected parties will also be taken on board as well as steps to be taken where applicable. The exercise will be concluded by Friday, 17 December 2021.

For purposes of fairness and transparency, the department will source the services of an Independent Investigator to scrutinize the report to ensure that all processes and procedures were implemented to the fullest before it can be released to all stakeholders.

We appeal to the society to give space and time to the department to be able to implement all recommendations as guided by all relevant prescripts in dealing with matters of this nature. Once all effected parties have been consulted, the report will be shared with all interested parties and the media.